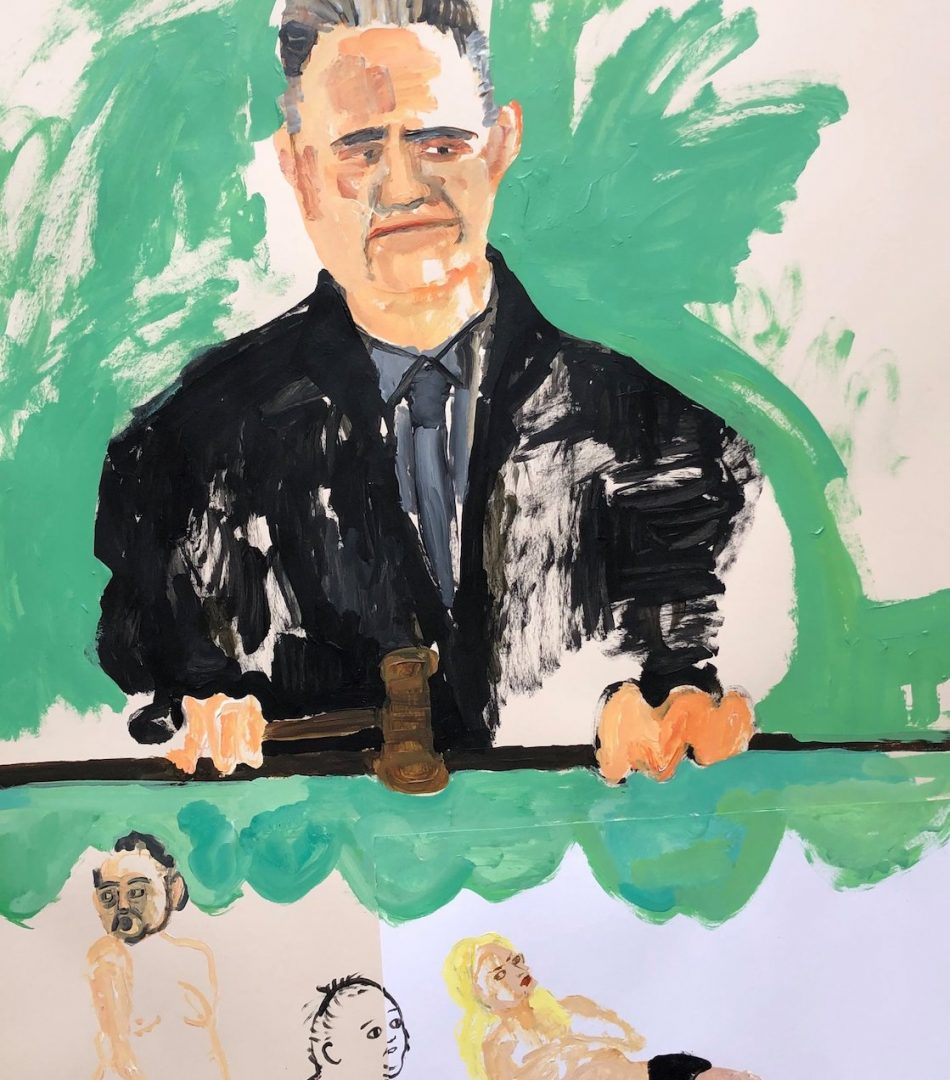 16 Nicholson Street’s final graduate residency of 2019 hosts Holly Osborne and Josie Lee, with Kieran Muir and Adam Benmakhlouf. The artists respond to the location of 16 Nicholson Street and recent cultural preoccupation with tarot and the mediation of archetypes to create work reflecting the dissonances inherent to engaging with systems relying on perspective and projection to manifest specific outcomes. Works responding to Benmakhlouf’s tarot workshop and Muir’s ceramics workshop with the residents will be exhibited alongside Osborne and Lee’s paintings and drawings. A final off-site tarot event at Mount Stuart on Bute will be held on the 19th of June and is open to the public.

Drawing from contemporary sources – finding images mostly from online – stock photos, screenshots, etc. Osborne engages with our relationship to image in the PostInternet condition, working from photos taken from television or even directly from the moving image onscreen as life drawing. Osborne works with stereotypes, ideals, and has recently been working from stock photos of stereotypical ‘goodies and baddies’ for the residency, inspired by 16 Nicholson Street’s location across the road from the Sheriff Court and the people this institution revolves around. While considering the female flaneur and the generalisations made when people-watching vs. the realities of inner lives, Osborne contemplates ideas of Justice and Judgement, how we define what is just, and inherent problems of perspective.

Similarly influenced by the location of 16 Nicholson Street, which was at one point a pub called ‘The Devil’s Advocate’, Lee has responded to this loaded space through a series of drawings which explore logic, rules, chance, luck, folk-lore and fortune. Lee’s work plays on 21st century uncertainty, exploring anxieties with place, technology, and absence, and working in a variety of mediums to explore the mundane and creating environments that are wholly familiar yet unsettling.

Kieran Muir’s current practice revolves around the fashioning of absurd cultural artefacts from imagined worlds and events using a variety of craft techniques including ceramics, textiles and glass. While the work seeks to question the legitimate place of craft in the realm of fine art, it also seeks to poke fun and invoke the humorous and irreverent spirit of the carnivalesque, drawing the viewer from the often cerebral environment of the gallery into the fun and frenzy of the carnival.

Adam Benmakhlouf’s practice mixes painting, writing, workshops, print, sculpture, sound and video. The works he produces reveal hints of autobiography, friendship and intimacy, which can be honest and candid. Alternative education, grassroots collectivity, chatty collaboration and camp performativity are the motley means of knowledge generation and insight within Benmakhlouf’s work.

The Mount Stuart Trust Visual Arts Programme and 16 Nicholson Street  teamed up for a unique tarot experience as part of our exhibition, schematic by Holly Osborne and Josie Lee, with Adam Benmakhlouf and Kieran Muir. This workshop coincided with Martin Boyce’s ‘An Inn For Phantoms Of The Outside And In’ at Mount Stuart and took place only days before magical midsummer.

This welcoming and playful workshop was led by artist Adam Benmakhlouf with Heather O’Donnell. The two hour session included discussion of tarot archetypes and making creative responses to the cards.