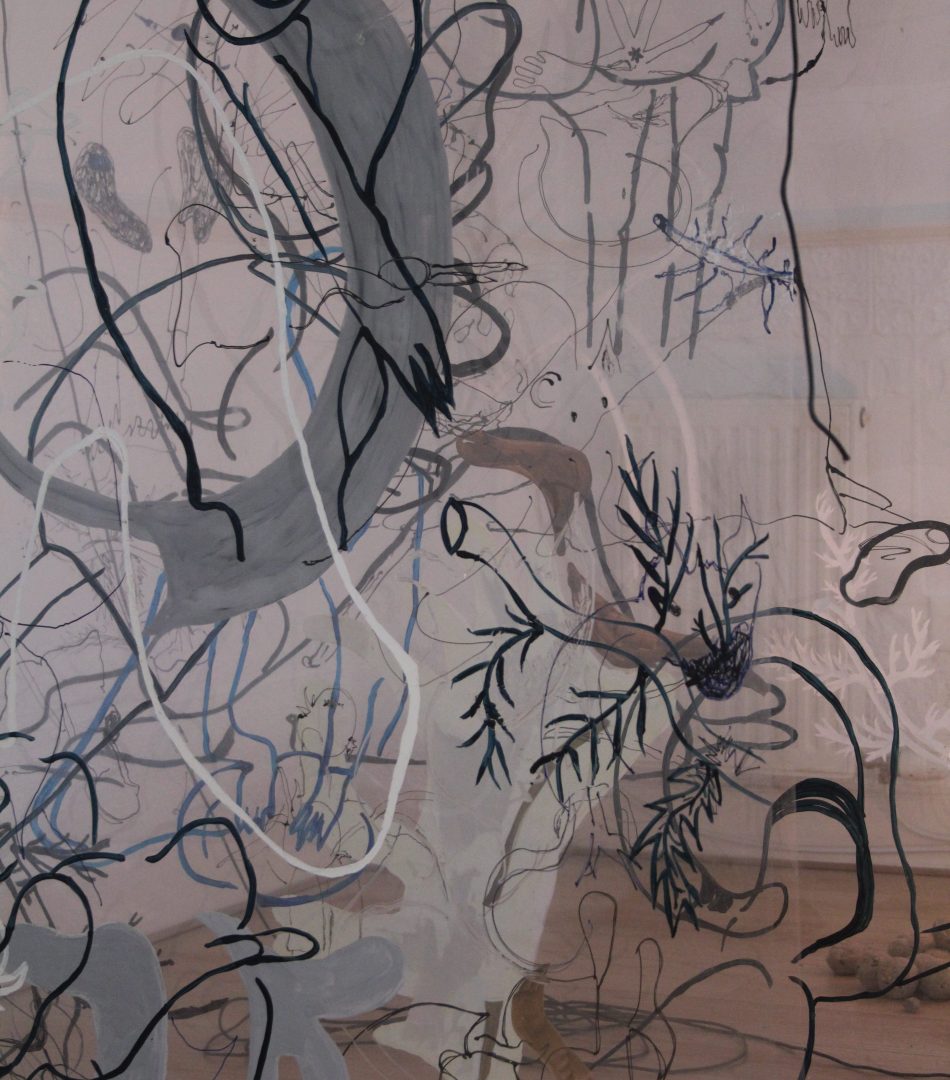 Leah Capaldi presents ‘Overlay’, a continual performance sculpture about the visible process of objectification through a body becoming a static object. The changing situation of the performance evokes ideas of afterness through the knowledge of the previous spaces the performance occupied. This rupturing of expectations through the renegotiated condition of stasis reflects on the stretching and suspension of time while pressure is exerted on the body and by the body. While connecting with the legacy of twentieth century performance art, Capaldi involves the viewer and the gallery itself in an interrogation of the nature of spectacle and gallery practice. It has previously been exhibited at ICA, London and Crispr, Colombia. Performances will be on Saturdays and Sundays and ‘Overlay’ will travel to a different location in the gallery everyday.

Ross Little presents Դուխով – Dukhov, a new film drawing upon the participatory action experienced during the recent Velvet Revolution in Armenia and the collective awareness seen in historical accounts of Faslane Peace Camp in Scotland. The film investigates zones of alternative governance and productive acts of emancipation, questioning existing choreographies of resistance through dialogical and self-reflective forms. Դուխով – Dukhov, an Armenian street slang word for self-belief / spirit is a recently popularised phrase that was written on protest leader (now Prime Minister) Nikol Pashinyan’s baseball cap. Investigating the political nature of collective forms, this film reflects upon the rehearsal, care, and maintenance of the gesture of freedom, as an entanglement of socialities and intersubjective actions. Direct observations, personal involvement and encounters informed this document of the demonstrations and their inner strategies of alliance, questioning the methods in which we develop forms of resistance and our political imagination.

This film has been commissioned by Falte Projects as part of Knots of Resistance, a research-driven project supported by The European Cultural Foundation and initiated during a residency at The Art and Cultural Studies Laboratory Yerevan.

Ani Schulze’s Under Jaguar Sun is exhibited on the gallery’s top floor. Her film ‘Merchant’s Freely Enter’ explores artifice and the construction of identity through the exploration of agricultural afterworlds and underworlds. In contrast to the volume and the cultivation of modernity in landscapes is examined through the conflation of agriculture and technology to create a dreamlike space of temporal uncertainty. The treatment of environment and body as something undergoing a symbolic assimilation is made bodily through the environment created to view the film on the gallery’s top floor, with hung spacious drawings on a transparent film (playing with transparency and opacity) renegotiating the viewer’s occupation of the space itself. The film observes the contemporary representation of Western landscapes and agriculture through drone-mounted cameras to raise questions about the political implications of sight, land boundaries and ideological narrative.

“Merchants Freely Enter“ examines structures and gestures of agriculture and nature in sharp long shots and exploratory aerial views. Simultaneously, Schulze embraces an enigmatic reading through the use of poetic yet psychedelic imagery. This specific way of storytelling portrays the ongoing interplay between a technologically controlled nature and a romanticization and longing for a self- contained nature.” -Dorothee Mosters on Ani Schulze’s ‘Under the Jaguar Sun’, 2017

“Linking objects, the architectonics of the gallery space, the unwitting participation of the visitors and the history of 20th century art practices, Overlay poses questions which are at the crux of art and exhibition making. By forcing the viewers to re-evaluate their position as foreign bodies in the gallery, as spectators of a living object.” – Jack Smurthwait, on Leah Capaldi’s ‘Overlay’ at ICA, London 2015.

Review by The Skinny

Interview with Ani Schulze by artfridge

With thanks to The Hope Scott Trust, European Cultural Foundation, Art and Cultural Studies Laboratory, and Falte Projects.